Reflection, resolution and revelation. I thought my New Year’s Eve celebration was going to be perfect now that I have a man in my life. As pathetic as it sounds, yes, I did think it was necessary to have someone to ring in the New Year with. And I had been passing New Year’s Eve alone since I can remember.

When I was 17, I had a chance to have a romantic NYE dinner at home with my then boyfriend. My family was out of town and I was going to cook for him. On his way to my house, he had a motorcycle accident.

When I was 22, I had a seriously long distance boyfriend. You read it right, the distance was serious -it was intercontinental- but the relationship was not. That was my first introduction to something called “non exclusive relationship”. I thought it was fair: I lived in Jakarta, the land of temptation; the man lived in Honolulu, the island of bikini bodies. But this is the gut-wrenching punch line: a few hours before the fireworks display started at Marina Bay, he told me that his ex girlfriend of 5 years, who turned down his politically correct diamond ring, called before Christmas to say that she still loved him and… he said it back.

To add injury to the insult, I needed to pee and there was a 100-meter queue at the ladies room. Of course, half of Singapore was there and guess what, I wasn’t the only woman with a bursting bladder.

When I was 26, I had another chance of having a wonderful NYE. Yes, there is a man in the picture. There was a man and a beach resort. Sadly, he was the manager not the guest. We had to sneak at 9pm to greet each other “Happy New Year!” pretending we were on Pacific Time, which is more bullshit than romantic, I tell you. Because then I got plenty of time during a dull NYE cabaret show at the actual Bali time, plenty of time moping alone.

So two years later, after a very nice Christmas Eve service last December, I was so sure that my NYE was going to be closer to perfection. I cooked dinner at home. It was nice to know that we wouldn’t be stuck in Jakarta traffic, wouldn’t have to pay ridiculous cover charge, and wouldn’t have to brush shoulders with strangers.

We were watching TV and before long, I was sleepy. I went to the study and check for some updates on the Internet. Matthew followed me with his own computer. We decided to play some music to drown the noise of premature fireworks outside. At the end, the annoying part was that we couldn’t agree on which genre of music to play that is agreeable for both. And that was how we ended 2011.

The next morning I thought, alright that was just my luck. I can never celebrate NYE in style.

But now, 11 days in, I think I was getting it wrong. Just like birthdays, it’s not about the party, pastry, and presents. It is about moving forward. And in the past, I didn’t have anything to look forward to.

This year, I’m looking forward to travelling together, not one travelling alone to see the other half. Flying 50 flights a year was anything but glamorous. It is as tedious as it is costly.

I’m looking forward to ironing his shirts because I just washed and dried them; not because it was crinkled in the suitcase and smelling of dingy airports.

I’m looking forward to sharing a meal, which we make, in our kitchen. Being entertained in 5-star restaurant and invited to sit on the chef’s table is something we’re always grateful of. I kid you not; simple spaghetti with a missing spice due to forgetfulness that we laugh over is priceless.

I’m looking forward to being happy. As our beloved mother, Mary Leppard, said to us before we parted 4 weeks ago: don’t forget to be happy.

We busy people can build rockets, or in our case, publish dozens of magazines and achieve million dollar worth of media impression, but we sometimes forget to be happy. To laugh out loud when it’s funny and to sip our hot chocolate slowly, savouring the fact that your other half prepared it with love. To wake up with a smile, because even though they accidentally kneed your rib in their sleep, they are there… not only the morning after New Year’s Eve but also the following ones. 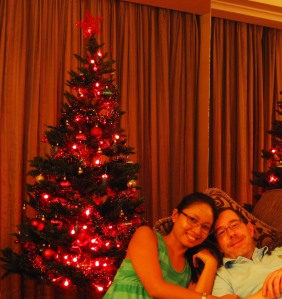 Our first Christmas tree! (it's plastic and store-bought, but that's okay)